Get fresh music recommendations delivered to your inbox every Friday.

Everything Matters But No One Is Listening [Quiet Slang] 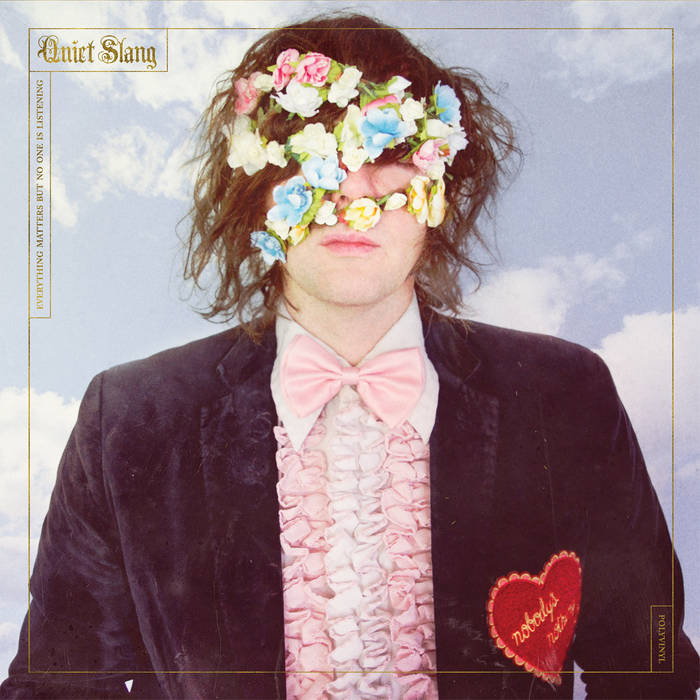 Roger Hartley Love these versions of previous songs. Gives them all a ballad feel and pulls out Westerberg-like emotions

Ryan Johanson Beautiful arrangements. They add so much to songs I already loved. A surprisingly vulnerable side of Beach Slang. Favorite track: Filthy Luck [Quiet Slang].

“Rock and roll is sort of my consolation prize for wanting to have been a writer,” says James Alex. It’s a humble admission from the frontman of Philadelphia’s Beach Slang, a fiery punk quartet whose raucous gigs often find the songwriter’s earnest lyrics bellowed back at him. Still, consider it a feat that fans are even able to hear those words from behind the trembling walls of distortion that serve as Beach Slang’s raison d’etre. “Play it loud, play it fast,” goes the mission statement that is the opening to “Future Mixtape For The Art Kids,” “Play me something that will always last.” Everything about Beach Slang is loud, from the guitars to its attitude to Alex’s weathered rasp.

Considering that, there’s something almost cheeky about the title of his new project: Quiet Slang. As the name implies, Alex is embracing minimalism, smothering the fuzz in favor of a cello, a piano, and his voice. In October, Quiet Slang released We Were Babies & We Were Dirtbags, an EP comprised of two Beach Slang songs and two covers from The Replacements and Big Star. Consider it an introduction to what Alex calls “chamber pop for outsiders,” because it simply serves as prelude to Everything Matters But No One Is Listening, a collection of 10 Beach Slang covers that’s set to drop on May 18.

The project’s seeds were planted just six months after Beach Slang’s formation, when Alex was asked to a solo Tiny Desk Concert for NPR. “That was just me, my guitar and a clumsy excuse for charm. But, yeah, the response was beautifully unexpected and really nudged my thinking,” he says. “Even now, at almost every show we play somebody's like, ‘I got turned onto your band from that NPR thing. You should make a record like that.’” A successful solo tour last year solidified the idea in Alex’s mind, but he says he wasn’t content to make a “campfire record,” elaborating that he “wanted it to have more weight than that.”

That’s when he turned to the project’s key influence: The Magnetic Fields’ Stephin Merritt. Merritt’s influence lent itself not only in his heartrending use of cello and piano via his work with the Fields, but also in one of his most famous lyrics. “Why do we keep shrieking/ When we mean soft things?” goes the final lines of “100,000 Fireflies.” “We should be whispering all the time.”

“That just always stuck with me,” Alex says, “how quiet can sometimes be more powerful.” He continues, “If Beach Slang is me fawning over The Replacements, Quiet Slang is me head-over-heels for Stephin Merritt.”

Alex linked up with longtime co-producer Dave Downham for the project, who worked with him in bringing on cellist Dan Delaney and pianist Keith Giosa. Rounding out the crew were Stacey Downham, Matt Weber, Charlie Lowe and New Jersey quartet The Warhawks, who lent their voices to evoke what Alex describes as a “back alley choir.”

The songs that spoke first and foremost to Alex were songs that he feels never quite achieved the vision initially had for them: “Future Mixtape for the Art Kids” and “Warpaint,” both from 2016’s A Loud Bash of Teenage Feelings.

“I was really proud of those things when I wrote them, but, once they left my home studio, something sort of slipped away. When they went loud, they never quite found the emotion I knew was tucked inside of them. For those two, specifically, I knew I wanted another crack.”

A good thing, too. “Future Mixtape For the Art Kids” is a rousing document of rebellion on A Loud Bash of Teenage Feelings, but the subdued strings and soft piano of Quiet Slang reveal a love story among outsiders, a midnight connection in dim streets as beautiful as they are cruel. And while the gritted teeth of “Warpaint” remain in its quiet rendition, the empathy coursing through Alex’s call to strength and spirit here conquers his anger.

“Warpaint,” and the album itself, closes with the last verse being played in reverse, a choice that helps to further distinguish Beach Slang from Quiet Slang. If the former is concerned with living as presently as possible, the latter feels like a spiral of memory, an attempt to remember the rush through the bleary eyes of a hungover morning after. It’s the walk home after a night that you know you’ll never live again, and the confusing mess of triumph and melancholy that covers it.

“I wanted the record to end not with a word, but a feeling,” he says, “even if it’s uneasy or hopeful or whatever. Just some weight of feeling.”

Though a new Beach Slang record is next up on Alex’s docket, he’s open to the possibility of more Quiet Slang. The project’s sophomore release, he notes, would contain original songs. “I guess I wanted to chase reinterpretation first. I dug the challenge of it. But, yeah, Quiet Slang deserves its own voice.”

Regardless of its future, however, he hopes the project can convey one simple thing: “Tenderness. I suppose that sounds overly simplified. But, still, it makes it no less sincere. Look, I’m trying to soften the world a little bit—there’s worse ways to be remembered.”

Bandcamp Daily  your guide to the world of Bandcamp